US Trailer for French Comedy ‘White as Snow’ with Isabelle Huppert

“Two gorgeous apparitions in just a couple of days!” Cohen Media Group has released an official US trailer for a French comedy titled White as Snow, also known as Blanche Comme Neige in French. This already opened in France back in 2019, and is only now getting an official US opening in the summer. It’s a sultry French spin on Snow White. Claire, a beautiful young woman works at her late father’s hotel that is now managed by her evil stepmother Maud. Claire unwittingly sparks uncontrollable jealousy in Maud, whose young lover has fallen in love with Claire. Maud decides to get rid of Claire who finds shelter in a farm in a small village in the French mountains, where she’s allowed to break free from her strict upbringing through encounters with seven “princes.” Starring Lou de Laâge as Claire, and Isabelle Huppert as Maud, with Charles Berling, Damine Bonnard, Jonathan Cohen, Richard Frechette, and Vincent Macaigne. This looks like a fascinating take on sexual awakening and what it means for women in France. Check it out.

Here’s the official US trailer (+ French poster) for Anne Fontaine’s White as Snow, from YouTube: 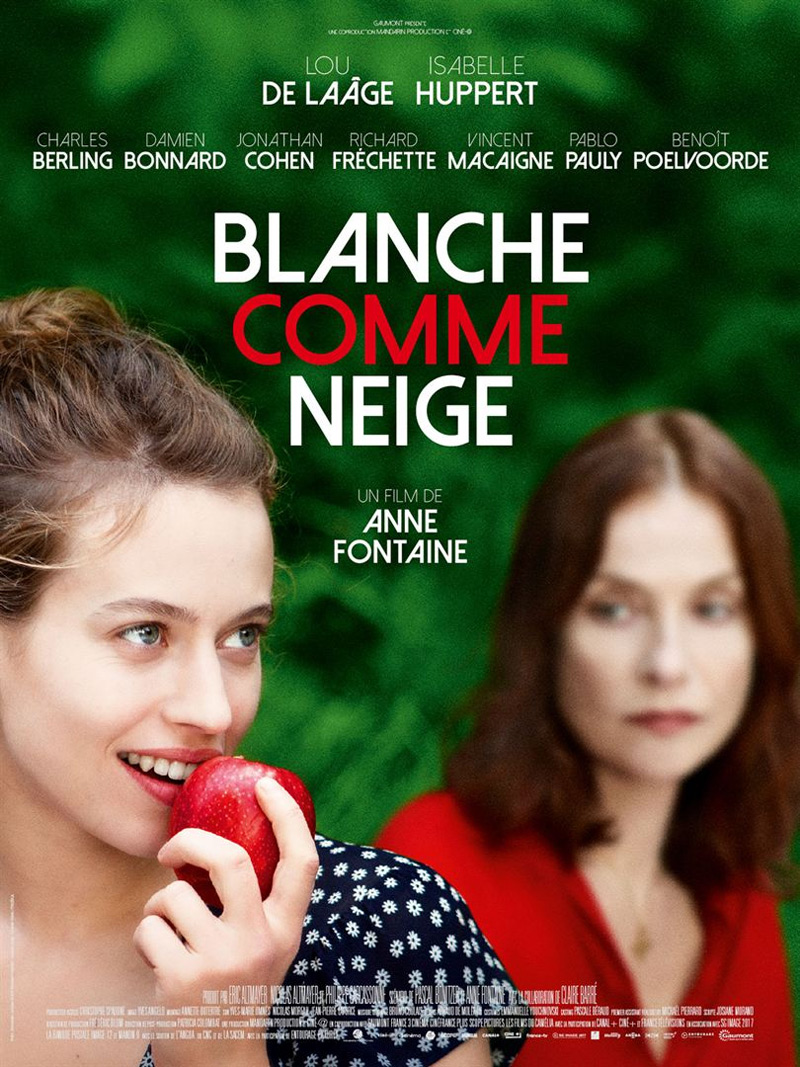 When Claire (Lou de Laâge), a beautiful but reserved young woman, unwittingly provokes the furious jealousy in her evil stepmother Maud (Isabelle Huppert), life as she knows it is over. Sent far away from home, Claire awakens, both figuratively and literally, in a small village in the French mountains. As if by magic, her formerly shy demeanor is gone and she is suddenly aware of her own feminine power. It’s the beginning of a radical emancipation. As Claire meets the locals and starts to take joy in her sexuality, soon one, two, three… seven men fall under her charm. For the first time in her life she allows herself to indulge in no-strings sex, taking pride in belonging to no one. But then Maud arrives wanting to reconnect, and Claire must decide who to trust—her sophisticated but cold stepmother, or the circle of adoring men that now surround her. White as Snow, originally known as Blanche Comme Neige in French, is both written & directed by Luxembourgian filmmaker Anne Fontaine, of many films including Augustin, How I Killed My Father, In His Hands, Coco Before Chanel, Adore, Gemma Bovery, The Innocents, Reinventing Marvin, and Presidents. Cohen Media will release White as Snow in select US theaters starting August 13th, 2021.